First of all, there are only three main types of supermarket anti-theft system in the market, namely radio frequency system, acoustic and magnetic anti-theft system and electromagnetic wave system. Does the supermarket security door have radiation? Does it affect pregnant women? The following Bohang will introduce you in detail. 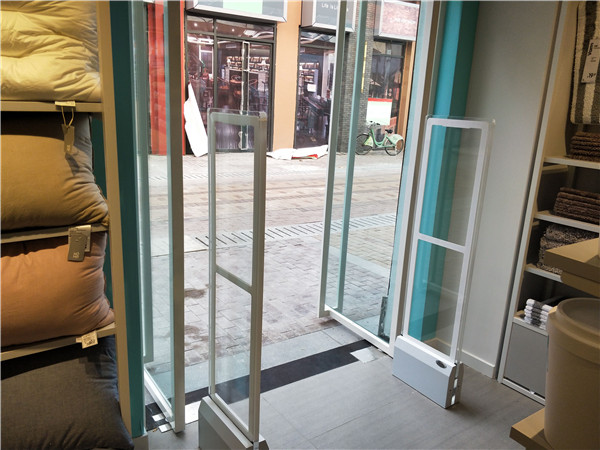 The radio system uses radio waves as the signal for transmitting and receiving, and the detection frequency range is 7. x~8. x megahertz.
The transmitted signal is a radio signal, which is the same signal as a mobile phone or a broadcast, but with different frequencies. The greatest advantage of the radio system is that the cost of the system is very low and the installation is convenient. However, due to its anti-theft label is ring coil type, the system is vulnerable to interference from some items, such as electronic products such as cash register, metal products and so on, resulting in false alarm or non-report of the system. The radio system has two kinds of labels, soft and hard, which can protect most of the goods in the shopping mall. The distance between the two supports should not be greater than 0.9 meters, which is usually used in shops with only one entrance and exit. There are two types of radio systems, vertical and channel, which are used to protect Department stores, clothing stores, supermarkets and so on.

The tuning fork only causes resonance when the oscillation frequency is the same. Acoustic-magnetic system is the application of this physical principle to achieve almost zero false alarm operation. When the label of the acoustic magnetic system fixed on the commodity enters the detection area of the system, it will produce resonance, but only after the receiver receives four consecutive resonance signals (once every fifty seconds), it will give an alarm. The characteristics of acoustic magnetic system are high anti-theft detection rate, almost zero false alarm, good anti-interference, wide protection outlet up to 3.5 meters, soft and hard anti-theft labels, which can protect most kinds of goods in shopping malls, and can repeat degaussing, even in the POS cash register system can still work normally. Acoustic-magnetic system includes vertical system, channel system and concealed system. There are more than 10 models for selection. It can be widely used in Department stores, supermarkets, monopoly stores, audio-visual stores, grocery stores, pharmacies, office buildings and other environments.

Electromagnetic system uses electromagnetic as detection signal. Electromagnetic system has the smallest label, and the label price is cheap. It can repeat demagnetization, but it is vulnerable to the influence of magnetic or metal substances and produces false alarm. The width of the protective outlet is generally about 09 meters. The system will not affect magnetic objects (such as tapes, videos, magnetic cards). The new generation of channel electromagnetic system is an electronic anti-theft system controlled by software. It uses digital processing technology to connect with degaussing system, cash register monitoring system and closed-circuit television monitoring system. If the fast degaussing board is used, the system can be degaussing repeatedly and the cost is high. There are two types of electromagnetic wave system: vertical and channel. The application environment is mostly in libraries, bookstores, sound stores, hotels, supermarkets and so on.